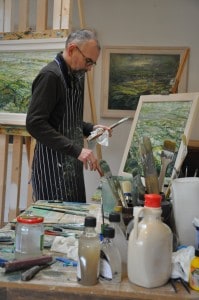 Liam was born in Inistioge, Co. Kilkenny in 1961.  He received a scholarship to study Art at the National College of Art & Design, Dublin until 1983.  He then left college to take up a position as an apprenticeship potter in Kilkenny. Liam won the Apprentice Ceramic Award at Kilkenny Arts week 1983. He then went onto the Grennan Mill Craft & Design School, Thomastown, Co. Kilkenny for one year. Liam then moved to Dingle, Co. Kerry, and was inspired to paint. Liam’s first solo show came directly from his personal experiences of fishing around the Blasket Islands of the Dingle Peninsula. He moved from Dingle to Tinahely Co.Wicklow in 1994, where he now lives and works from his studio at home. During his time in Dingle, where he spent the summers working as a lobster fisherman around the Blasket Islands and the west Kerry coast, he developed a love of the sea that was to have a profound influence on his journey as a painter. Water remains his principal inspiration – horizons, islands, boats and coastlines all feature in his paintings. Liam works intuitively, applying paint in layers to create texture and depth of colour, and will revisit a work time and time again until satisfied with its emotional resonance. His paintings are in private collections in Ireland, Europe and U.S.A. 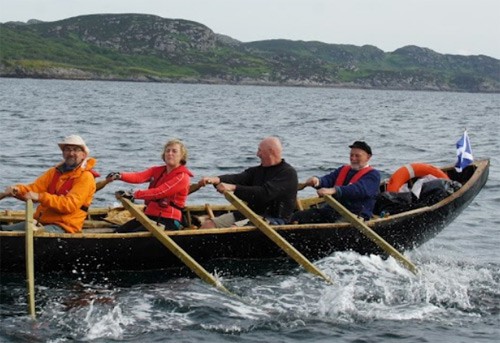 “Shoreline” An exhibition of paintings by Liam Holden

‘The real voyage of discovery consists not in seeking new landscapes but in having new eyes.’ – Marcel Proust

In 2011, Liam Holden and Danny Sheehy built a Naomhóg in Ballyferriter, using traditional methods. As the boat began to take shape, they talked of making a voyage to the Island of Iona in Scotland. That idea became a reality on the 26th of May 2012 and the voyage began. Along with Liam, the crew included Anne Burke, professional photographer, Breanndán Ó’ Beaglaoich, musician and Danny Sheehy, traditional boat builder. They set out from Ballycastle, Co. Antrim and the crew rowed and sailed, arriving on Iona on the 1st of June.

After spending ten days on Iona, they began the return journey, fishing along the way and camping near the boat at night. They made several stops at the isles and inlets along the west coast of  Scotland before finally returning home after 24 days at sea.

This exhibition of paintings began with the building of the Naomhóg and grew out of the ensuing voyage. In Liam’s own words:

For my art, this experience of being at sea day after day on the boat and the making of the boat is an important component. I have a great admiration for the skill and craftsmanship of the Naomhóg makers of old who constructed a vessel of such seaworthiness and beauty. Doing something like this reinforces why I love the sea. 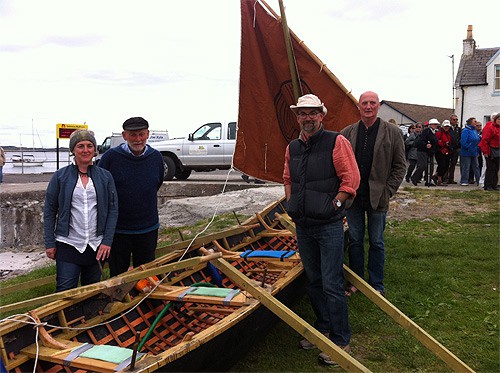 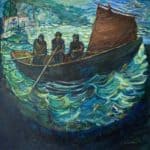 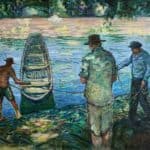 On the River Adour, France 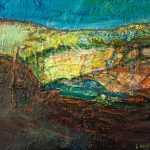 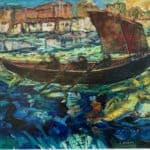 Camino by the Sea, France.