“No city or landscape is truly real until it has been given the quality of myth by a writer or painter, or its association with great events. The way Michael Flaherty is dealing with the Brandon area is part of this mythologizing, the making of this area very special”. Born in Cloghane, Brandon Co. Kerry Michael Flaherty’s true vocation to painting came out of curiosity. He attended school at Killarney, then graduated with a BA in UCC and a H. Dip in Maynooth in 1974. He never really wanted to teach so he took a year out lived in Inniscarra and came to drawing almost out of boredom. He states that he basically found a pencil, “I thought this was it – it was like discovering language”. He took night classes at the Crawford and benefited from his teacher of John Burke. He then applied to Sligo School of Art and was accepted on enthusiasm alone. Here he was taught by John O’Leary. It was here that he found his style. He spent some time in Edinburgh but he returned to Kerry after the death of a relative in 1988 and evolved this style until it was personal to him. He worked briefly with Sean McSweeney, and his paintings have been compared to McSweeney among others, “Michael Flaherty is best known for his landscapes, spontaneous, lyrical compositions that bring to mind aspects of the work of artists as diverse as Vincent Van Gogh, Paul Henry and Sean McSweeney”. Influenced by the expressionists, he doesn’t subscribe to their movement but empathises with their style. The apocalyptic power of nature in his unpopulated landscapes evokes memories of Emil Nolde but he is doing it in a highly personal style and indeed like the German expressionists his “pictures have a kind of frenetic emotional intensity”.

His has a “remarkably assured technique” and is “incredibly fresh, incredibly instant. He captures very quickly scenes which he’s very familiar with”. He is uninhibited in his use of paint, working in layers of thick, painterly impasto to the third dimensional. His use of colour is bold, vibrant, daring and unconventional. His response is the depiction of a scene, or an object or an animal as filtered through his imagination, hence the colours are heightened, making the scene more intense and the sense of movement more vital.

Flaherty spends at least eight hours per day painting, and he might work on ten paintings at a time. His output is astounding, his subject matter ranging from the landscapes of his native Kerry to Tuscany, fuchsia, montbretia, heads which have a strong sculptural element to them and finally animals. He is obsessed with painting but continually sets himself new challenges, and never compromises his artistic vision.

Below is a recent review of Michael’s work by Aidan Dunne, published in ‘The Arts’ section of The Irish Times:

“Michael Flaherty’s ‘Dark Light’ at the Hallward Gallery is appropriately entitled given that it marks a decisive move away from the bold colours he has previously favoured. His new work is more muted and more tonal generally, though he still relishes strong contrasts, with splashes of vivid yellow, for example.

“He is a landscape painter, and he concentrates on the landscape around him, that is the Cloghane-Brandon area under Mount Brandon and including the valley of the Abhainn Mhor River. What seems to have happened is that his growing knowledge and appreciation of this terrain have deepened his sense of engagement not with place per se but with the structure of the landscape.

“Where the earlier, more colourful paintings were about surface, now there is a sense of layered process, of great stretches of time and slow change.” 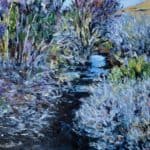 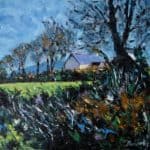 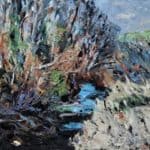 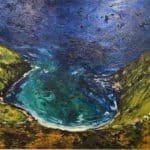 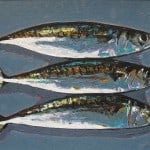 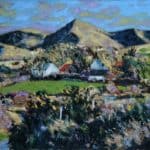 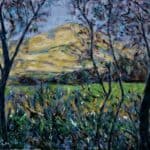 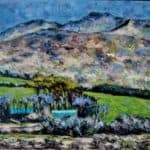 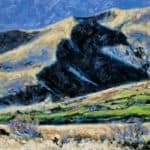 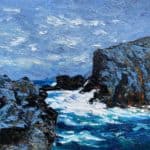 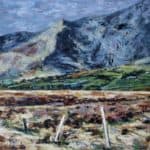 Fence in the Bog 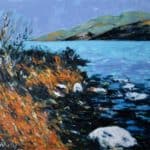 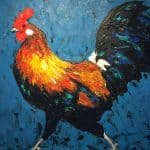 Cockerel I, The Swagger of Domestic Fowl 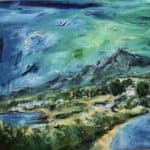 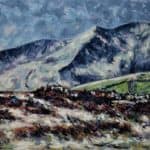 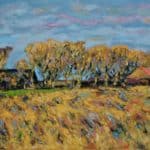 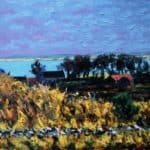 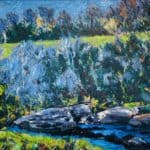