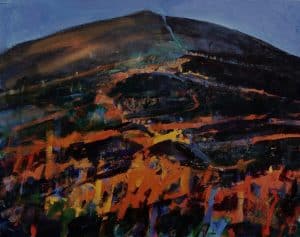 Patsy Farr is a painter and musician living and working in the west of Ireland. Her career as an artist began in Cornwall in the 1980’s under the training of Henry Israel. During this period she showed work in Cornwall, Bristol and London. In 1991 she won the Frank Herring award at the Pastel Society.

Since moving to Ballyferriter in 2000 her work has been shown in one person and mixed exhibitions in Dingle, Paris, and The Blackbird Gallery, Kilkenny & The Doorway Gallery, Dublin. Her paintings are widely collected and in 2004 a piece was purchased for the National Museum of Ireland.

Of her work she says “Painting is alchemy, from light into pigment, no recipe, no rules and no guarantees… Since moving to the west of Ireland in 2000 my work has been influenced to a great extent by the landscape, the sea, the weather and the potent combination of these 3 elements. I try to paint what I see and not what I know about a subject so that my eyes do the work, and not my intellect. My work is always a visual response to a subject and I revel in the sensuality of paint.” 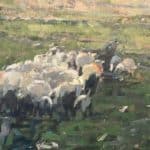 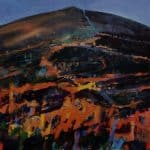 Fire on the Mountain, Martháin