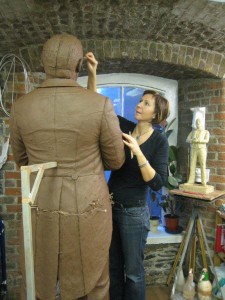 Elizabeth O’Kane is a sculptor and painter from County Antrim, based in Dublin. Her sculptures are figurative and focus on anatomy, portraiture, and movement. She works in bronze and stone.

Other collectors of Elizabeth’s work include The National Concert Hall, The National
Library, The Department of Foreign Affairs, The Irish Embassy in Washington DC, The Irish
Embassy in London, University College Dublin, the University of Limerick, Shannon
Airport, the IRFU, Munster Rugby and Belfast City Hall.

Elizabeth been an invited artist at both the Royal Ulster Academy and the Royal Hibernian
Academy and the of Art (where she won the RHA Conor/Moran Sculpture Award) and
regularly shows her work in their annual exhibitions. She has also exhibited with the Society
of Portrait Sculptors in London and at the Zurich Portrait Prize Exhibition at National Gallery
of Ireland.

Originally a French translator Elizabeth travels widely with her work. She has taken part
time studies at the Florence Academy of Art in Italy and the Art Students League of New
York. She is a member of The Art Students League of New York, the Water Colour Society
of Ireland, and the Ulster Watercolour Society. She lectured in portrait sculpture at IADT,
Dun Laoghaire, and teaches portrait sculpture in her studio in The Design Tower, Dublin.