– An Ode to Made Impressions –

a commemorative exhibition of sculpture by

An Ode to Made Impression is an exhibition that brings together a lifetime of artworks by achieved artist and special friend Hans Blank. The first major retrospective to date, it celebrates Hans’ career which spanned over 40 years and a friendship with us here at The Greenlane Gallery for more than 25 years. It offers us an opportunity to experience the entirety of Hans’ work and showcase his sensual use and tactile exploration of his chosen medium, cast bronze.

Born in Wormerveer, The Netherlands, Hans (1952 – 2019) attended the Royal Academy of Expressive Visual Arts in Amsterdam. He received the URIOT award in 1975. In the mid-eighties Hans, with his wife Marijka, sailed around Europe in a thirty-eight meter, two-mast schooner. In the cargo hull Hans had a full working studio. As they sailed around Ireland they happened upon the small fishing town of Dingle. There they met local man Paddy Flannery who had a keen interest in Dutch trawlers. A firm friendship developed between the two families which later led to Hans and his family buying a house and working studio in Dingle.

Working primarily in bronze, Hans fluctuated between contemporary and historical  subjects. While he addressed all manner of topics his preferred theme maintained a consistent maritime character. He studied shipwrecks, trawlers, dike workers, lifeboats and various other nautical themes. His many works depict St Brendan’s voyage, Viking vessels, sailors, Irish fishermen and our wonderful Celtic boats and Irish currach. Within his subject Hans was also preoccupied by themes of archaism; in the decline within a structure’s building, its foundation and in the materials as they fell into disrepair. He expressed these concerns primarily through figurative representation, but where detail became secondary to form. He brought forth the light and shadow contours of his subject to highlight its shape and movement. Often the actual material would take over, almost becoming the subject matter itself.

Hans sought much of his inspiration from Ireland; from our rich history and Celtic mythology – our ogham stones, menhirs, standing stones and stone circles. He used Celtic symbolism and metaphor to unveil the mystery of his subject while maintaining a sense of the magical. The wild Atlantic west Kerry coast in particular became an important source of influence to Hans. The historical and archaeological stories from the Blasket Islands, the lives of the islanders and their tales from the sea intrigued him. Blank said of it –

‘The island is always special for me. Some years ago I spent time on board a salvage vessel, lying day and night beside the Great Blasket Island. The island looked majestic at night and left an indelible impression on me’.

The Blasket Islanders currach prevailed for many decades in Hans work. He was especially interested in the prehistoric migration of cultures across oceans from continent to continent, and in the transportation by simple sea vessels. The prehistoric shapes of his ships and rafts, produced in bronze and often combined with stone, are going back to ancient nations and their culture. The Irish currach for Hans encompassed this discussion and became a recurring subject.

‘The borderline between water and shore is intriguing and extraordinary. The boat was of great importance to the island population. The employment and safe passage of these boats to and from the island, at times, became a matter of life and death. The construction, form and shape of the currach are very special and a constant source of inspiration to me.’

In his own opinion Hans did not subscribe to any one artistic movement, past or present. He described his style as a personal statement of an outward expression, which he felt was rooted in the visual world. Hans aspired to achieve art that was both cultural and national while yet remaining deeply personal. Indeed, every finger impress appears to be in the right place and serves the right purpose. The result is a powerful and evocative collection of sculpture that was accurately developed from a robust practice which links Dutch and Irish tradition.

We were deeply saddened by the passing of Hans earlier this year and we would like to offer our sincere condolences and sympathies to his sons Jan and Rik, and to his family and friends. 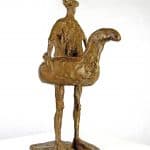 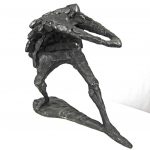 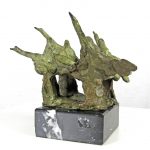 Ladies of the Lake 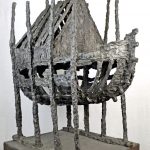 Staring at the Sea