Born in London, Vivienne St Clair worked as an archaeological illustrator before moving to the west coast of Ireland in 1986. Painting professionally since 1993 Vivienne sees her work as a journey, an exploration of the language of painting. For Vivienne painting is about the emotion in the paint, the marks and the textures; the subject is only the starting. She states that painting is “about what you see and what you feel; it is about capturing the feeling and the atmosphere of the moment”. Since moving to the small town of Ardfert in Co Kerry Vivienne’s approach to painting quickly developed. She expanded into the realm of impressionism and specialises in figurative work, still lifes and landscapes. Her painterly approach to colour and texture also add to her unique sense of style, both in oils and pastels.

A visual junkie, Vivienne loves to watch and observe a subject. She says “painting for me it’s all about observing and learning. I paint the things I love, usually driven by the beauty of what is before me. If I see something that visually excites me, I want to put it down in paint”. Her subjects are always personal, such as her son Marcus and his friend collecting hermit crabs, or children playing in her local area, the act of fishing and fishermen, or aspects of the rural landscape. Her paintings are like snapshots and she enjoys that voyeuristic aspect to her work creating that evocation of a memory.

Her still lifes evoke memories of the Dutch masters. They are praised their impeccable draughtsmanship, harmonious composition and a remarkable ability to convey the effects of light. Though they have a timeless quality she places them firmly in a contemporaneous context by the objects she chooses; modern day ceramics, glass and fabrics.

Vivienne has held several solo exhibitions and shown in many group shows. Her work has been accepted by both the Royal Hibernian Academy and the Royal Ulster Academy and she’s shown in galleries throughout the UK, US, France and here in Ireland. 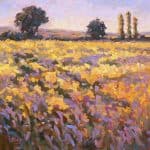 After the Sun Went Down