In discussing art he remains in awe of the artistic process saying “I am somewhat alarmed at the thought of putting down in logical manner, a process which is inherently complex, mysterious and un-knowledgeable – but not to resist a challenge”. “My interest in painting stems from a deep love from an early age of a number of pictures including Rembrandts Late Self Portrait at Kenwood, Piero della Francesco’s Nativity in the National Gallery London and Vermeer”.
Arthur K Maderson was born in London in 1942. From 1959-63 he studied Fine Art at Camberwell School of Art and in 1963 won the prestigious Anna Berry award in an open competition with all final year graduates of the leading art schools of the period. However despite much praise of his work it was not until 1982 that he began to exhibit his paintings due to destroying a large body of his artistic output. . His progress has been a rapid success producing a series of one man shows in the West Country and in London. In Sept 1989 he moved to Ireland realising a life long ambition and is now recognised as being one of our strongest figurative painters. He sees both figurative and modern painting to be in a crisis describing them as “hopelessly bankrupt”. The writings and criticisms of modern art are even more desperate in their categorising. Painting has become “an extension of wallpaper, an acquired status symbol no less receiving at best a few seconds of attention” .

His primary objective is to rejuvenate painting to “give it back”, to return to the true values of painting. Painting is an act of loving. He explores a theme from a small original study making it into a more ambitious piece but he can be undecided as to its scale or format, the placing of figures etc. Consequently three to five pictures end up evolving all together at the same time. He says “I try to spend my life trying to enquire into the process of perception in the difference between what we think we see and what in fact we see” . He has done this with much success in his series of Lismore River Pool Series and in his Tallow Horse Fair studies. These are large figure compositions, and many of his paintings feature family members. Each of his paintings are draped in sunlight caught in a statement of paint, frenzied stabs of colour which build up into a complex visual plane. It is all about perception and how one perceives form, objects light he says, “A major obstacle in painting is the impossibility of seeing the rich raw ambiguous initial information before it has been processed and reinforced by what we expect to see….The evolution of seeing starts with seeing objects –then value of objects to values in themselves – unhitched from forms”. He continues that in his painting “the process of organisation is then one of responding to and making sense out of what is essentially chaotic”.Influenced by Bonnard and Vuillard who were in pursuit of raw information, he admires more Fred Cummings in the way he captured small particles of colour yet regrets that Cummings did this with a reliance on formulaic thinking. He also admires Lucien Freud who “sees the object but with an exquisite eye – he is to my mind Rembrandt with the light on”. He has been recognised as being a leading exponent of contemporary impressionism but his concern is not just to capture the fleeting moment but also for the “formal, structural pictorial elements, which place him firmly in the 20th century whilst recognising roots that reach out beyond Monet to the book of Kells and gothic stained glass. In this sense his aims are those of Cézanne, which is to convert our experience of momentary sensations into something lasting, thoughtful and timeless”.

Artist in the landscape, Lancia Spain 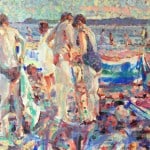