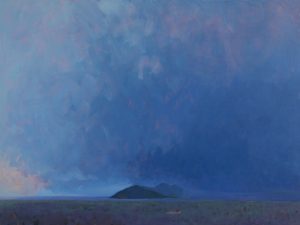 Tom’s primary interest is in the quality and atmosphere of light, whether it is in the studio, the landscape, over the sea or down a street. How a certain moment can transform a place into something that goes beyond the mere visual. A brief gap of time and place. There is a progression of movements within his paintings where light and colour are compressed above the horizon as time moves towards night. This resonant, sometimes sublime moment marks a poignant time of the day that Tom strives to capture in his work.

When Tom first visited Dingle he was immediately struck by the immense beauty of the place and ever since has been making regular trips out to the West to study and absorb Dingle’s landscape. He said of his first experience of Dingle ..

‘it hit me in the gut, or rather softly grabbed me and I was smitten with the place. I have always been fascinated and drawn to the West and Kerry seems to be on the edges of edges. I discovered the area around the Blasket Islands resonated with something in me that I’d overlooked in my work for some time. The sheer magnitude of its presence and the open light that shines in from the ocean is something I have always sought out in my work. The sublime view I found as I turned that corner hit me like a bell being struck; a sensation as clear as the air and the light that shone in from the ocean.’

Tom grew up in South West London and West Dorset. He studied Fine Art at Epsom School of Art, Surrey. In 1982 he returned to West Dorset to next to the sea. There he worked in a beach hut in Charmouth, studying the changing light of Lyme bay. Later in 1992 he moved to Mousehole, Cornwall, where he currently lives and works.

As well as the Greenlane Gallery, Tom exhibits regularly in the UK, Italy and USA. He has undertaken many painting expeditions to Highlands of Scotland, Venice, Sicily, Spain, Finland and the USA, and his work can be found in various collections worldwide. He is a member of The Chelsea Arts Club, London and is a visiting tutor at Newlyn Art School, Cornwall. 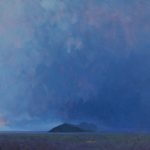